It is my aim to help the reader grasp the Gospel Truths revealed in Leviticus 23.  This is the foundation upon which are faith is established.  It is where the plan of redemption is first laid out for us, but revealed in the life, death and resurrection of Messiah Yeshua, the only begotten Son of the Living God.
In this study we will employ the PaRDeS method.  There are four levels that we can understand the Word of God:
Peshat – meaning the most common understanding…on the surface.
Remez – meaning a prophetic looking back to look forward…this is usually and exact phrase or hint that causes us to remember and earlier scripture, that will explain something more about the current one.
Drash – The spiritual application
Sod – the secret or hidden meaning, revealed by the Holy Spirit, sometimes to a generation to which it applies.
Since we can never separate our Lord Yeshua/Jesus from the Logos Word, then this would also apply to our relationship and capacity to know Him…
Peshat - we can Know Yeshua in His humanity as He is revealed in the Gospels.
Remez – we can see the types throughout the Old Covenant that point directly to His person, mission and rulership.
Drash – We can know Him by the Spirit in a real way when He comes to live in us.
Sod – We shall know Him as He really is when He is revealed from Heaven.


Lev 23:1  And the LORD  spake unto Moses, saying, Lev 23:2  Speak unto the children of Israel, and say unto them, Concerning the feasts (Moed) of the LORD , which ye shall proclaim to be holy convocations (Miqra) even these are my appointed seasons. 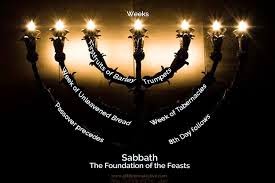 There are technically seven Moedim/Feasts or Appointments with God, but first on the list is the Shabbat the day we are commanded to rest from work. The Sabbath is not counted among the Moed but is in addition to the seven Feasts, bringing the list to eight.


Miqra – Meaning rehearsal, it is an assembly for us to practice and learn that we might understand when the fulfillment comes.


The Hebrew calendar contains 12 months, but the beginning of the month is in conjunction with the New Moon, so the calendar is Lunar.  A prophetic Biblical Hebrew year consists of 360 days…when you count time in the Scriptures, just stay within that pattern.
Each month carries two numbers.  From the beginning, the months were reckoned starting from the first month of Tishrei, which corresponds to Sept/Oct.  That was the first month from Genesis, counting forward to Nisan in the spring, corresponding to Mar/Apr as the seventh month.  But from the time of the Exodus, Adonai changed the calendar for them saying that Nisan would be the first month from then on, so Tishrei became the seventh month.

The Sabbatical years fell every seven years. During the Sabbatical or Shmitah year, the land was supposed to rest, not to be sown or reaped.   After seven sabbaticals, 7x 7 or 49 years there was to be a Jubilee year in the fiftieth.  But the fiftieth was actually the first of the next heptad or 49.  It was a time when all property returned to the original owner, debts were cancelled, and the land rested yet another year.
When Jesus was raised on the first day of the week, He appeared to the disciples, but Thomas was not there.  He appeared to them again on the eighth day…Sunday or the first day.  So, here one becomes eight and eight becomes one.  (we will discuss the significance of Thomas later)

Seven Days in a Week …

A literal day begins at sunset and ends at sunset.  Gen 1:5…it was evening and it was morning, the first day.
A prophetic day - 1 Pt. 3:8 But, beloved, let not this one thing be hidden from you, that one day is with the Lord as a thousand years, and a thousand years as one day.
I pray you will continue to read each installment as we work through the scriptures and understand the Truth of the Gospel, answering some long pondered questions and clearing the muddy waters for some of you.  The Lord bless you with wisdom and understanding...till next time.

Posted by Rabba Laurel at 2:08 PM No comments:

Rabba Laurel
Called by the Lord to ministry from 2002. To restore the Hebraic heritage to God's people in the Body of Messiah.